The Madagascar Encyclopedia - The Best Madagascar Wiki
Register
Don't have an account?
Sign In
Advertisement
in: Characters : Enemies 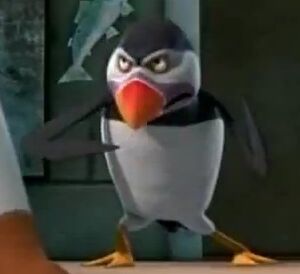 Huffin and Puffin
Skipper is suddenly accosted by an old foe, a Danish puffin named Hans. Hans states that he has come to make peace with Skipper for past injustices, but Skipper refuses to accept the puffin’s apologies. Eventually Skipper offers Hans his “flipper in friendship,” but the penguins are soon tied-up by Hans via an “exploding rope bomb”. Hans brings the group to Julien’s plastic volcano to trap them. Is this the end of the penguins?

The Return of the Revenge of Dr. Blowhole
Alone on a secret mission in Shanghai, Skipper walks into a trap set by Hans and Dr. Blowhole which results in Skipper’s memories being taken from him by Blowhole’s “mind jacker” device. Skipper falls into the ocean and washes up on an island. Which Central Park Zoo neighbor from the past will help Skipper regain his memory?