The Madagascar Encyclopedia - The Best Madagascar Wiki
Register
Don't have an account?
Sign In
Advertisement
in: Episodes 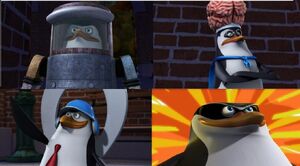 After several comic books are discovered inside a backpack, Skipper warns the other penguins of the dangers of the comic fan lifestyle and of the non-clandestine actions the superheroes contained within them execute and proceeds to dispose of the comics to thwart their negative influences.

At night, however, the others secretly view the comics and then decide to act as a superhero team (Private as “Steel Penguin,” Kowalski as “The Throbbing Cerebellum,” and Rico as “Barf Bag”), foiling minor inconveniences throughout the zoo. When the zoo’s clock is accidentally destroyed in the process, Skipper organizes an investigation. Will Skipper find out who is to blame?