The Madagascar Encyclopedia - The Best Madagascar Wiki
Register
Don't have an account?
Sign In
Advertisement
in: Characters : Other

Bada and Bing the gorillas 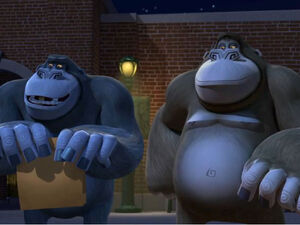 Gut Instinct
A woman named Gladys sneaks various snacks to the zoo animals. All the animals appreciate her, except for the lemurs, who Gladys believes are cats and are given cat food. Gladys slips on a mango pit in front of the lemur habitat and hurts her arm. Julien is faulted by the other animals for throwing the pit into her path. Did Julien do it for revenge in her ill-conceived food?

Operation: Good Deed
After the penguins witness a boy returning a dropped dollar to a man and calling it his “good deed for the day,” Skipper decides that the team will seek to increase the frequency of their own good deeds. After two failed attempts at assisting zoo visitors, the penguins seek a good deed with Marlene. But it required succeeding good deeds with Julien, Burt the elephant, Bada and Bing the gorillas, and an unconscious pizza boy. Can the penguins made it a good deeds day by delivering the pizzas within 30 minutes?

Over Phil
Mason who is a clean freak becomes fed up with Phil's sloppy actions and leaves the chimp habitat. Private hears their fight and allows Mason to come to the penguin habitat for a visit. It is so clean Mason decides he wants to move in with the penguins. Meanwhile Phil throws a party with the gorillas and Joey. The habitat gets so messy that the penguins have to rescue the gorillas and Joey but can't find Phil. Where is Phil and will Mason help?

The Penguin Stays in the Picture
Whenever the zoo’s annual brochure cover photo is taken, Private is always selected for it. This year, however, the photographer is drawn to Mort instead. As Private expresses his displeasure, Bada and Bing overhear and offer to take Mort “out of the picture” for him, but Private rejects their proposition. The gorillas fail to take the hint, however, and when Mort goes missing, Private fears the worst.